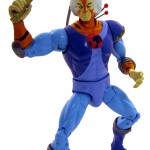 There are plenty of pics and info. Click the headline of the story for all the goodies!

“ThunderCats” fuses sci-fi and sorcery to reignite the thrill of the 1980s hit television series with all the favorite characters exploring an expanded universe. It’s sure to have kids everywhere once again shouting, “ThunderCats, Ho!” Lion-O wasn’t ready to be king and he definitely wasn’t ready to be the only cat standing between immortal evil and the total destruction of his world, but fate left him little choice. Only he could lead this quest.

Bandai America Incorporated has launched the iconic ThunderCats toy line back into action with an all-new look! Kids and fans of the original 1980s animated television show will be able to wield the mystic Sword of Omens to become Lion-O, King of the ThunderCats. Join Lion-O as he battles against the evil Mumm-Ra and hollers, “ThunderCats, Ho!” The line includes action figures, vehicles, play sets and role-play items aligned with the all new “ThunderCats” animated series.

Thunder, Thunder, ThunderCats Ho! 4″ figures are based on the all new “ThunderCats” animated adventure series from Warner Bros. Animation. Crafted with great detail and quality, collectors and kids can play or display their favorite ThunderCats Heroes and Villains in their own environment and recreate scenes from the TV show.