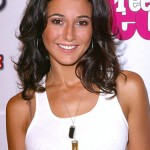 Thundercats 2011 is set to launch this summer on Cartoon Network. Before it begins to air, we want to take an quick look at the voice actors for the new show. While some are very familiar to cartoon fans, others aren’t so easily recognized.

To kick things off, we’re starting with the voice actor who is probably the least recognized; Emmanuelle Chriqui, who will be voicing Cheetara. Click the headline of the story to learn about the new voice of Cheetara, and stay tuned for our next spotlight in a few days. Emmanuelle Chriqui

Emmanuelle Chriqui is a relative newcomer to the voice acting world, and an up and coming actress who can be seen in relatively unknown roles in various films. She’s provided various female voices in numerous episodes of Robot Chicken, but isn’t a recurring voice on the show. Her breakout live action role was as recurring character “Sloan McQuewick” on HBO’s smash hit Entourage.

However, the young actress has expressed growing interest in voice acting. she has landed two high profile voice gigs in Thundercats 2011 as Cheetara, and in Disney’s highly anticipated Tron: Uprising (coming 2012) as a character called Page. It’s clear that Chriqui has a bright future ahead of her as both a live action and voice acting star.