As expected, with the new Thundercats 2011 Cartoon coming this Fall, Warner Home Video is planning on re-releasing the original series on DVD. Thanks to a report from TVShowsOnDVD.com, we have the details. The series will be released in small 2-disc sets containing 12 episodes each. Each season will be comprised of roughly 5 sets.

From the sounds of it, there is nothing new compared to the original releases, save for the smaller sets and redesigned box art. Thundercats Season 1: Volume 1 is scheduled fro release on July 12, 2011 at an MSRP of $19.97 (most stores will likely have it cheaper). Here’s what is included:

Springing into action: the first animated adventures of the feline-inspired fantasy! A noble band of survivors from the peaceful world of Thundera bravely faces off against vicious mutants intent on destroying them. Make way for exotic creatures, mystical powers and action-packed battles of good versus evil in the exciting saga of the Thundercats!

In these first-season adventures – 12 Episodes on 2 Discs – from the dynamic animated series, the Thundercats adopt Third Earth as their new home and encounter alien beings galore…some friendly, some looking for a fight! And while they brave their strange surroundings, their young leader Lion-O struggles with his new responsibilities as head of their foundling civilization. Crash with these cats for Over 4 Hours of Classic Cartoon Thrills!

Episode List:
• Exodus
• The Unholy Alliance
• Berbils
• The Slaves of Castle Plun-Darr
• Pumm-Ra
• The Terror of Hammerhand
• Trouble with Time
• The Tower of Traps
• The Garden of Delights
• Mandora the Evil Chaser
• The Ghost Warrior
• The Doomgaze

So, if you missed out on the initial release, then this is your chance to relive your fond childhood memories. If you currently own the original DVD releases, it doesn’t appear as if you will be missing anything. Click the thumbnail for a look at the box art. 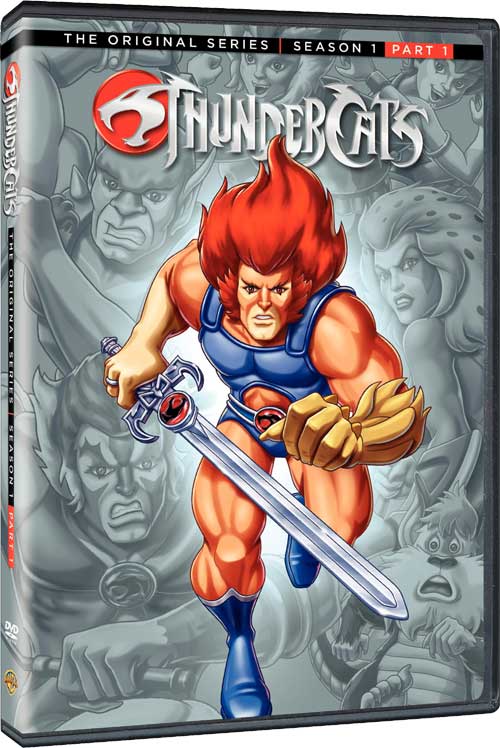