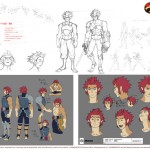 IGN has posted some great new images and details for the upcoming Thundercats 2011. Included are the character “style sheets”, which show the full 360 degree view of each character. IGN was able to talk with writer/producer Michael Jelenic about the series. There are some interesting bits about how the Thundercats start off as a race devoid of “technology” in the new series, and how that “technoogy” begins to affect them as the show goes on. They also talk in depth about each of the new main characters. Also, it looks like they will be doing a weekly posting on new Thundercats 2011 info, so we’ll be sure to follow that closely.

Check IGN for the full write-up, and the style sheets have been mirrored here. Click the headline of the story to see them.