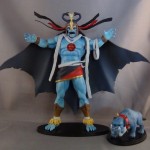 Icon Heroes has sent along some new photos and info. They have revealed the San Diego Comic-Con 2011 Exclusive Ma-Mutt PVC Figure. The figure will be available when you buy the Mumm-Ra Staction Figure at the AFX booth during Comic-Con.

“Hello, we are pleased to announce the debut of our Thundercats Mumm-Ra the Ever Living PVC Deluxe Staction Figure at this year’s San Diego Comic-Con! This is the first character in our line of PVC Staction Figures. Mumm-Ra will first be sold at the Action Figure Xpress booth (#3345) and then after the show at specialty shops and online retailers. As an added bonus for attendees, Action Figure Xpress will be giving away their Exclusive Ma-Mutt Staction Figure with every purchase of Mumm-Ra at the show! Attached are some photos for your use including a comparison shot with our Lion-O Mini Statue to show how massive Mumm-Ra is!”

The Mumm-Ra Staction Figure has been previously revealed. Check out the San Diego Comic-Con 2011 Ma-Mutt Press Release. Click the headline of the story to check out the new photos, including some new Mumm-Ra photos.