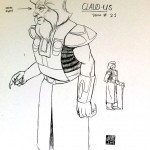 Once again, forum member LiarDice Films has been kind enough to share a piece of Thundercats history with us. Today we exclusively have never before seen concept art from the Original Thundercats Cartoon Series. The art was created by the great Jim Meskimen. You may recognize Jim as an accomplished voice actor, who has appeared in numerous projects such as G.I. Joe Renegades, Avatar: The Last Air Bender, Justice League as well as numerous video games. Jim is also known as a fantastic illustrator.

According to LiarDice Films, Jim was the sole U.S. artist working with Rankin Bass. Some of his work, as you can see, made it into the television show as well as other media. Some of the ideas were never used.

Now you can check out, what is only a sampling, of some of Jim Meskimen’s superb concept art for the original Thundercats. Click the headline of the story for a huge gallery of images.