Tonight brought us the third episode of the Thundercats. Lion-O and crew mourn the loss of their king, as well as their people. With Lion-O determined to find and destroy Mumm-Ra, he sets the team on a course to find him, forgoing the quest for the Book of Omens.

Click the headline of the story for the review. The Episode
With Thundera destroyed, Lion-O, Tygra and Cheetara place Claudus to rest. Throughout the ruins of Thundera, the Lizard Men are looting for valuables, while the Wily Kittens go about looting the looters. Lion-O, as the new Lord of the Thundercats, commands the team to hunt for Mum-Ra, ignoring the protest of Cheetara and Tygra, who believe they should be searching for the book.As they leave the ruins, they are joined by Wily Kit and Wily Kat, though Lion-O feels this will hinder their quest for vengeance.

They head towards the desert, and quickly run low on food and water. As hope seems lost, and Lion-O seems hellbent on continuing at the expense of his crews health, Snarf spots the Sand Sea. Out of, seemingly, nowhere, a huge mound of food appears. As the near starving team gorges themselves, a net hauls them into a ship filled with Fishmen. Angered that the Thundercats have ruined their bait for the “Ramlak”, Captain Cornelius orders the cats killed and served as their food.

The team prepares to meet their makers as a huge set of tentacles attacks the ship. The crew, too frightened to fight effectively, quickly lose control. During the melee, the ‘Cats are freed and go on the offensive. Lion-O and company quickly take control of the situation, slicing and dicing the tentacles of, what we come to find out is, the Ramlak. After the battle, and the Ramlak flees, Cornelius welcomes the Thundercats to his crew. Cornelius explains to Lion-O that the Ramlak destroyed the home of the Fishmen, by drinking their water, which leaves their people to die and their home to crumble. Cornelius is on a quest for revenge, with or without the help of his crew. Cornelius’ desire to avenge the loss of his world only furthers Lion-O’s need for revenge.

The crew spots the Ramlak, and Lion-O and Cornelius head to battle, directly into a thunder and lightning storm, as the crew of Thundercats and Fishmen protest. The ship is quickly destroyed, as the two leaders are blinded by their need to destroy the Ramlak. But as the crew begins to suffer, Lion-O ignores his anger and abandons the attack to save those in need of help. Cornelius never wavers and is swallowed by the massive Ramlak. As Lion-O attempts to save the crew, the Ramlak attacks again, this time devouring the Lord of the Thundercats himself. The Ramlak’s victory is short lived. Lion-O slices through the Ramlack, emptying out the massive supply of water the creature was storing.

With the Ramlak destroyed, their home land restored and their captain gone, the Fishmen thank Lion-O for saving heir race. Lion-O, seeing the value of teamwork and the destructive nature of vengeance, instructs the team they will be heading to find the Book of Omens.

Teh scene then cuts to Mumm-Ra’s tomb. Mumm-Ra and Grune are revealed to be torturing the still alive Jaga. Mumm-Ra knows that Jaga is concealing the location of the book. As Jaga proclaims that he would die before revealing his secrets, Mumm-Ra uses his powers to force the information from the weakened Jaga. Jaga is trapped within a dark device which then forces his to shine a light on the location of the book. Mumm-Ra is pleased as the credits roll.

Review
f you couldn’t tell, the story is clearly a “Moby Dick” inspired tale. Cornelius’s blind rage and need for revenge ultimately is his undoing. But Lion-O is able to see that blind vengeance, at the sacrifice of those on your team, is no way for a king to behave. It’s well written and given time to flesh out the story. The writers took great care in showing Lion-O’s turn from anger to compassion.

The writers are also not afraid to continue the dark tone of the series premiere. It’s not often where a cartoon is willing to show, or allude to, something like the main characters being cut up, cooked and eaten. It’s a welcome change of pace to a lot of shows that shy away from more mature themes like this. This was Lion-O’s episode to shine, with the Wily Kittens getting the some much enjoyed screen time as well. It’s clear, as the show progresses, each of the characters will be given time to develop further, as their roles become better defined.

Bottom Line
Another great episode. While it couldn’t possible top the action and tone of the premiere, it didn’t suffer from a major drop off either. The animation and writing were excellent and the story, while a familiar theme, still played out in a way that strengthens the group. And while Mumm-Ra was relegated to a single scene, it is a very effective scene and sets up for a potentially great race to find the Book of Omens. 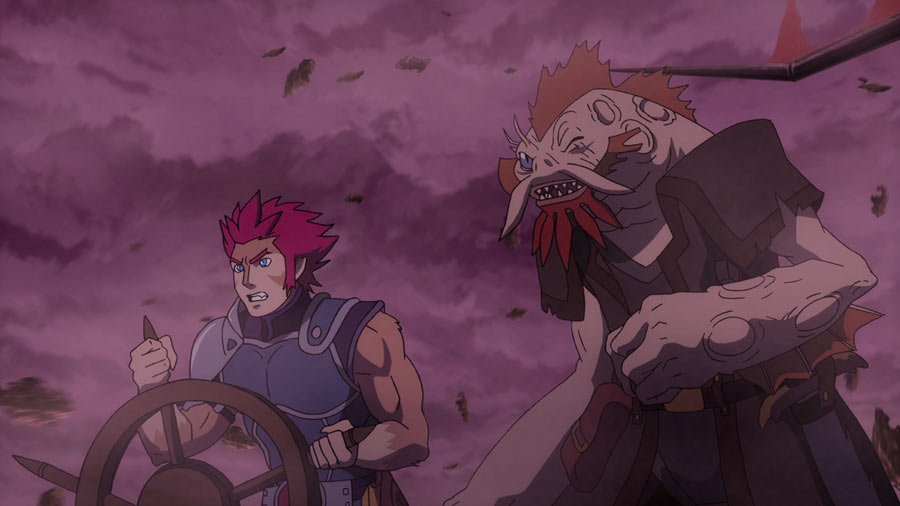