In the fourth episode of Thundercats, Lion-O and crew are on the run from a massive army of lizards. As they flee, they come face to face with a tiny race of plant people called the Petalars. While attempting to understand their new found allies, the Lizard men are ho on their trail…

Read on for our review of Song of the Petalars. The Episode
The Lizards, lead by Slithe, are quickly tracking the Thundercats through a forest. As the Thundercats attempt to rest for the evening, they are forced to go back on the move as they spot the massive lizard army that approaches.

Immediately, Tygra protests fleeing, as he points out that their father, Claudus, would have stood and fought. Lion-O asserts his authority and orders them to run. As they are fleeing, they come across a massive shire, hidden beneath a series of thorned vines. Knowing the lizard army would not be able to easily follow, Lion-O leads the team into the thicket.

As they draw closer to the center of the shire, they begin to hear the soothing songs of the Petalars. As they sing, a new young one is born as an older member of the race passes on. These are a tiny, plant based, race who are initially fearful of the approaching Thundercats. However, one young Petalar named Emerich fearlessly and curiously approaches the ‘Cats, filled with questions.

The Thundercats and Petalars quickly bond as the Petalars share the story of how they were swept away from their home by a mighty storm. They have spent generations attempting to follow a cryptic map that will lead them back home. Lion-O, who has grown very fond of the young Emerich vows to help them find their way. As they begin to travel, Lion-O becomes a mentor for Emerich, training him how to handle a weapon. Emerich is snatched away, in the middle of his training, by a large bird-like creature. Emerich fights back, and the bird drops him. Lion-O quickly runs to his young friends location only to find a teenaged Emerich.

As it turns out, the Petalars lifespan lasts only a single day. The Thundercats realize that their short time spent with Petalars is a lifetime to them. And the Petalars learn quickly from their friends, especially Emerich, who is quickly growing into a leader and hero.

Their journey comes to, what seems, an end as they are attacked by three quick moving lizard soldiers ordered in by Slithe. With the help of Emerich and the Petalars, they all escape. But their victory is short lives as the map leads them to a dead end. Lion-O is clearly conflicted, as he wonders if his own short life has any real meaning amidst the death of most of his kind, and the hopeless situation they are in. During this time, Slithe orders the entire area burned down.

With certain death closing in, Emerich notices that the updraft from the approaching flames offers the Petalars an escape.As the last of the Petalars leaves, Lion-O turns to Emerich, now close to death of old age. With his dying words, he comforts Lion-O and the Thundercats, leaving behind that it wasn’t the destination, but the journey they took together that matters. As his friend passes on, Lion-O knows his next action must be to fight.

The Thundercats come out of the thicket in a surprise attack. They manage to hold their own for short time. But the lizards numbers, and technology, are too much. With the group preparing for death, a blast from nowhere takes out one of the lizards mechs. Then a strange vehicle roars into view, quickly taking out scores of lizards and mechs. Slithe and his army are left with no choice but to flee. As the lizards run, the vehicle pulls in front of the group, and a hatch opens. Out comes a shadowy figure, who is quickly attacked by a straggling lizard. This proves a bad move for the lizard as the shadowy figure quickly dispatches him with a pair of nunchucks. Then we get a close-up, as Lion-O asks “Who are you?”, we get our response…Panthro!

Review
Clearly meant to be a filler episode. However, if all their fillers are handled so delicately, the we’re in for a great ride. The writers took great care in building up the relationship of Emerich and Lion-O. Lion-O learned to appreciate time and Emerich helped him to understand how important it is to fight on, even in the face of a losing battle. It was pretty well done and great to watch Lion-O go from a teacher of a young Petalar, to that same Petalar’s student by the end.

Slithe is deliciously evil in this episode. His utter disregard for the life of his troops, and the ruthless way in which he attempts to handle the Thundercats is a welcome addition to the story. These lizards seem like a true threat. And with the lizards being a clearly formidable force, it makes the story much more tense.

Not all was perfect here. Though the episode was well written, the overall story is still in a holding pattern. The ‘Cats are no further on their journey than they were at the start of episode three. Mumm-Ra and Grune were absent from the action for a second straight episode, and it’s hard to get a sense of how they’re truly going to fit into this story right now.

Bottom Line
A good, but not great episode. The entire thing was there to build up to Panthro’s introduction. And while they are taking great care with developing Lion-O, the story arc has stalled out a bit. As a stand alone episode it was fine, and it was still enjoyable. We need to get back to their journey to find the Book of Omens so the story feels like it’s progressing. 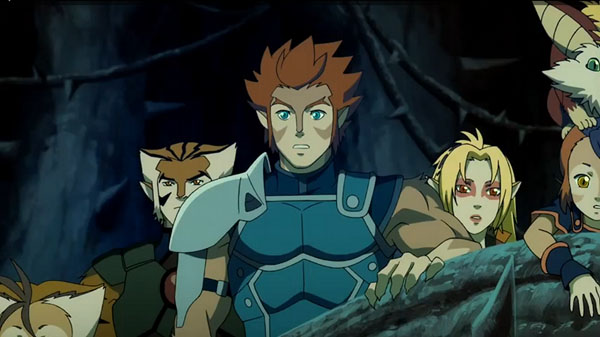 Song of the Petalars Review