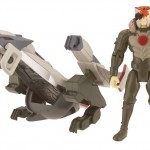 Bandai has sent along a bunch of new images and info for some upcoming Thundercats toys.

Click the headline of the story for more images and info. Basic Vehicle with 4” Figure – Tiger Flyer with 4” Tygus

New for 2012, players can take down their enemies with the new Tiger Flyer, the first air craft in the ThunderCats collection!

• The Tygus figure unlocks a LED light up feature in the Tiger Flyer.
• Utilizes the ThunderLynx embedded magnet system to allow other 4” heroes and villains to ride inside and unlock the feature.

Gain the power of Panthro and step into battle with his favorite weapon, his nunchucks.