Read on to check out our review of Thundercats Episode 15: The Trials Of Lion-O Part 1. The Story
Lion-O uses the book to help locate the next stone. But the location appears to be high atop a cliff, that is not easy to get to. Ignoring the pleas of his team, Lion-O blindly leads them up the path, leaving them exposed to a possible attack. With the other Thundercats begging him to turn around and think of a different way, Lion-O decides to stop and rest, allowing the team to eat. Just as everything seems the most peaceful, Slithe, Addicus and Kaynar attack. The trio, along with the lizard army, quickly subdue the Cats.

Slithe threatens the life of Wilykit, which causes Lion-O to leap back into action. He grabs the claw shield. But as he prepares to attack, Kaynar pushes him off the edge of the cliff. Lion-O crashes down to the river below and becomes trapped by a pile of rocks. As he struggles to break free, he takes his last breath and dies. Slithe leaves with the rest of the captured Thundercats.

Lion-O’s “spirit” is rescued by the stone in his claw shield and he comes face to face with Jaga’s ghost. Jaga informs Lion-O that the stone has deemed him worthy of returning to life…If he can pass a series of trials. Lion-O accepts and is whisked away to his first trial. He is confronted by two spirits taking the shape of the Wily Twins. They inform him that he has to steal a key from them in order to move onto the next trial. But the twins can create a near infinite amount of holograms, causing Lion-O confusion. Eventually he realizes he can use his sense of smell to weed out the fakes. As the twins lament that Lion-O is taking too long, Lion-O informs them that he already has the key. Impressed, the twins send him off to the next trial.

Back at the lizard army, the captured Cats mourn the death of Lion-O. They look to Tygra, the new heir to the throne, for leadership. He goads Slithe and Addicus until Addicus attacks him. The twins use the opportunity to free themselves and the rest of the team, who all attack. But, as they are fighting, Slithe orders them to fall back, as he has the Sword of Omens, and that’s all Mumm-Ra will care about. So they leave the Cats, as Tygra vows revenge and to get the sword back.

Lion-O enters his second trial. It’s a race through a labyrinth against a spirit disguised as Cheetara. The first one to the center, where the key is, wins. He is given a head start and races from one dead end to another. As Cheetara eventually passes him, Lion-O falls back, giving up. He sees a flying creature and realizes he can just use that to fly to the key, which he does. He barely beats Cheetara to the key. Thinking he has won, he is informed that he is only half way through the trials.

The Review
Where to start here. I found this to be a bit of an uneven episode. Lion-O is being written into a massive character regression here. And it really makes little sense. All of the lessons from the last 14 episodes have been flushed down the tubes as he morphs into a jealous, whining moron. It just doesn’t fit with where the show was headed at the end of “Season 1”. Lion-O is becoming the weakest of the group, which I’m hoping, the “Trials” episodes correct and get him back onto the right path. Otherwise, the writers will be continue doing a disservice to the lead character.

The episode isn’t a total wash though. Slithe, Addicus and Kaynar are establishing themselves as legitimate threats. Addicus and Kaynar continue to be ruthless and crazy, and they add a nice new dynamic to the mix. Having one of the new guys be the one to push Lion-O off the cliff shows that these guys are willing to make the nasty decisions that Slithe couldn’t or wouldn’t. It was also a nice touch to have Tygra sacrifice his well being to allow the others to free themselves. They are setting Tygra up nicely for a bit of a wake up call. His early success as leader is surely going to be met, eventually, with him realizing he is not fit to be called king, thus truly establishing Lion-O as the right choice. Otherwise, we’re going to have another 11 episodes of the same themes instead of moving the group forward.

Bottom Line
The writers seemed to ignore the character advances Lion-O had been making, recycled similar themes from earlier episodes and established Lion-O as someone not fit to lead. On the bright side, the actions was fantastic, the enemies are establishing themselves as worthwhile foes and Tygra is being given a chance to shine. Since this is a 2-parter, the rating for this could really be raised if the second part builds off the and advances the story. As a stand alone episode, it was really, in my opinion, one of the least enjoyable of the series so far. 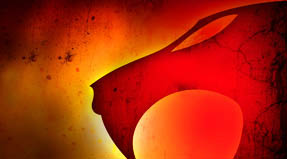