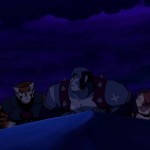 After a one week hiatus, WB has provided us with a few screen caps and preview clips. This week we get the conclusion to the 2-parter with Thundercats Episode 16: The Trials of Lion-O Part 2.

The other cats remain trapped in Mumm-Ra’s Pyramid and, believing Lion-O is dead, attempt to escape to prevent Mumm-Ra from getting the Eye of Thundera out of the sword. Lion-O has two trials left: Panthro and Tygra, but he fails to defeat the latter. Pleading for a chance to save his friends, Jaga grants him life until sunrise to try and save his friends
and stop Mumm-Ra.

Click the headline of the story to check out the preview images.