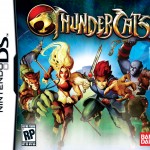 Talk about flying under the radar. I haven’t seen this talked about anywhere. Apparently, Namco Bandai are releasing a Thundercats Video Game for the Nintendo DS. The game is being developed by Aspect Digital, who previously worked on Naruto: Ninja Council. Siliconera got a chance to play a demo of the game at the Global Gamer’s Day press conference, where the game wasn’t even announced, but just sitting on the demo floor unceremoniously. The game will be a side-scrolling brawler. In the game you play only as Lion-O, who can be assisted by the other Cats. The game is set to follow the cartoon story closely. It will feature sound effects and voices from the cartoon and will feature concept art as unlockable extras.

Thundercats for the Nintendo DS is scheduled for a release in August 2012. Click the headline of the story to check out some screen shots!