I know it’s a bit late, but let’s get this party started. Lion-O tries to make good on his promise to free his fellow cats. But does the team get more than they bargained for when they face off against a race of rats looking for a cursed sword?

Read on to check out our review of Thundercats Episode 20: Curse of Ratilla. Also, if you haven’t already, be sure to check out our Thundercats Episode 20 Curse of Ratilla HD Screen Caps. The Story
We pick up right where the last episode left off. At Mount Plun-Darr, the Rats are using the last living Cats as their slaves. They force the cats into a deadly cave in search of the Sword of Plun-Darr. However, every cat who enters perishes in a horrible way. The Cats fear the cursed sword so much, that they risk their lives attempting to escape rather than be destroyed by a curse.

Cheetara and Tygra go undercover in hopes of finding out what is truly happening in the caves. Lion-O, Panthro and Pumyra head towrds the camps to free their race. But when Pumyra witnesses one of the rats, Mordax, abusing a cat, she throws caution to the wind and attacks, forcing Panthro and Lion-O to join in. As she mercilessly beats upon Mordax, she is stopped by Lion-O. He spares Mordax’s life i nthe hopes that Mordax will see his mercy and respond to it, as the lizards did in the first episode. no such luck as Mordax puts a knife to Lion-O’s back, forcing them to surrender.

Mordax brings the captured Thundercats to his leader, Ratar-O. He relays to them the story of Ratilla, who found the Sword of Plun-Darr in a swamp. Ratilla used the sword to lead the rats above being scavangers. But Ratilla is thwarted by Jaga, who uses the Sword of Omens. Jaga entombs the sword inside a massive mountain to hide it from anyone who would look to use its power.

Back in the caves, Tygra and Cheetara continue to elude the trappings of the curse and make their way to the sword. Cheetara uses her staff to break the crystal surrounding it, which sets off a chain reaction. Fearing death is imminent, they fall into each others arms, letting a kiss be their dying memory.

Ratar-O orders Mordax to kill the cats. But before he can, the throne room begins to cave in, burying the lot of them under the rubble. As Lion-O digs his way out to help his fellow cats, he is attacked by Ratar-O. Mordax is ordered to help, but refuses. Instead, kicking the claw shield and Sword of Omens to Lion-O before fleeing. In the ensuing battle, Lion-O defeats Ratar-O much the same way that Jaga did to Ratilla. As Lion-O gathers up Pumyra and Panthro, they are met by Tygra and Cheetara, carrying the Sword of Plun-Darr. Before they can destroy the sword, they see that the mountain is surrounded by Mumm-Ra’s mechanized forces, ready for attack.

Review
It’s nice to have back-to-back episodes heavy on the main story, leaving the needless side quests behind. Actually, they seem to have left Wily Kit and Kat behind as well, as they are nowhere to be found, and this episode is better for it. This ep moves along at a brisk pace, and the writers do a fine job converging the two main stories together here.

We only get a small bit of the lovey-dovey stuff. But having Pumyra throw her hat into the ring for Lion-O’s affections will hopefully allow him (and the writers) to move past the Cheetara stuff.

In this episode, Lion-O is given a chance to prove how well he can lead. His compassion for other living creatures, while initially biting him in the rear, pays off in the end. He is doing everything he can to show that he will be a king that is intent on uniting the races. You can sense that this will eventually pay off in a big way. The writers are finally realizing that having Lion-O be a strong leader will only make the show better.

The events presented this week also have lasting ramifications on the entire series. The cat race is not only alive, but now free and headed back to the ruins of Thundera to await Lion-O’s return. The Sword of Plun-Darr has been unleashed and there’s no doubt Mumm-Ra will get his hands on it and become even more formidable.

Bottom Line
A very enjoyable episode that is clearly going to lead right into the next. It featured the kind of writing and story flow that made the early episodes so enjoyable. You get a nice sense of the story moving forward and how Lion-O is progressing. 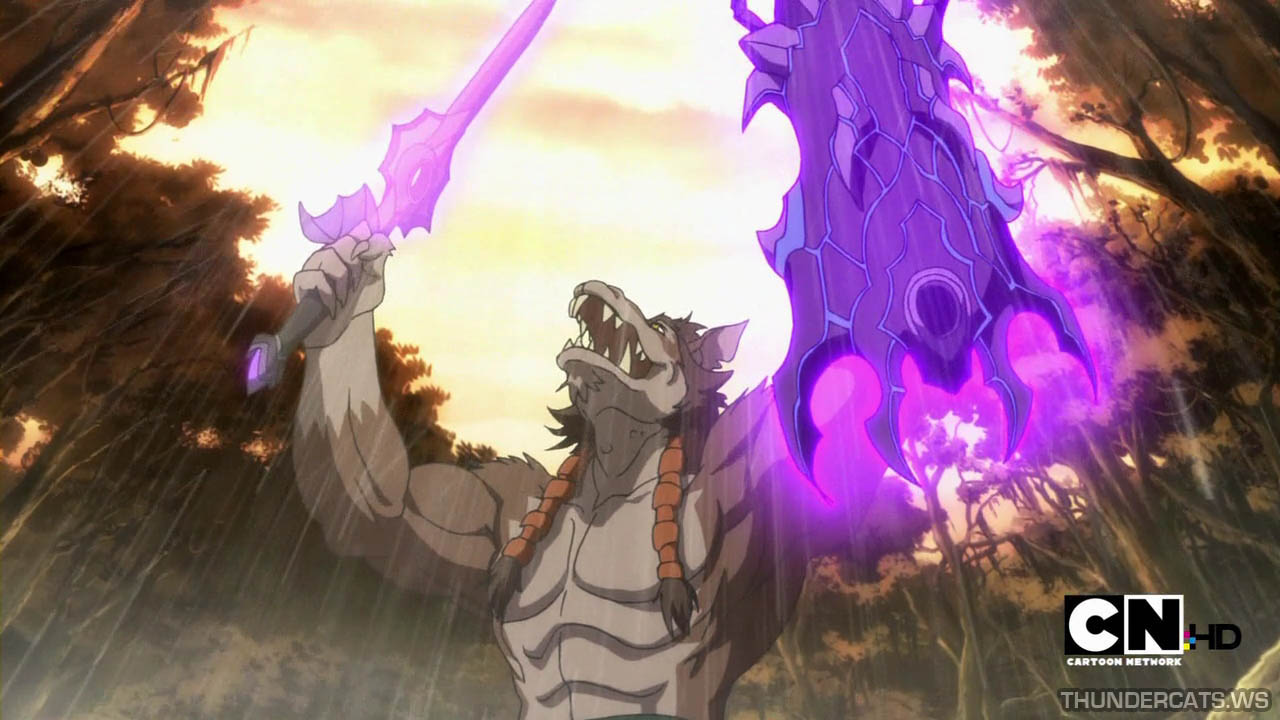