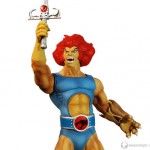 Mezco has put up a listing for a San Diego Comic-Con 2011 Exclusive Variant of their upcoming Mega Scale Thundercats Lion-O. So this officially gives us our first Thundercats exclusive figure. The figure will sell for $50.

“ThunderCats Ho!
Straight from the ThunderCats’ Lair on Third Earth, it’s Lion-O and the legendary mystic Sword of Omens.

Featuring 7 points of articulation this mega figure is superbly detailed, perfectly capturing not only the iconic look of Lion-O as he appeared in the classic television series, but the essence, of Lion-O as he proudly raises the mystic Sword of Omens towards the heavens and roars out “Thundercats, Ho!”

Lion-O is packaged in a collector friendly window box that allows him to be displayed while remaining Mint In Box. This is a non-numbered limited edition item. Edition size TBD.

NOTE: You will be charged at the time your order is placed, merchandise ships in last week of July 2011.”

Click the headline of the story for the photos. 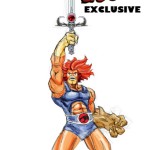 MTV Geek got a special behind the scenes look at the making of Mezco’s highly anticipated 14″ Lion-O. Included in the special sneak peek, is our first shot of the packaging design for the figures. We have mirrored the images, but you can read the full article Here. 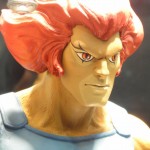 Mezco was at Toy Fair 2011 and they showed off their upcoming mega sized Thundercats Lion-O. The 14″ Lion-O is based on the classic cartoon version and comes with a Sword of Omens.

Check out some high resolution images by clicking the headline of the story. 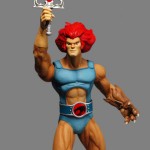 The Thundercats Blog is reporting that Mezco is apparently jumping into the Thundercats figure ring. At the UK Toy Fair 2011, they announced plans to do a mega scale Lion-O. The figure is a staggering 14 inches tall, features seven points of articulation, a fully extended Sword of Omens, and will retail for about $100. Lion-O will come packaged in a window box.

However, Big Bad Toys Store has the Mega Scale Lion-O on pre-order for only $35! It arrives July 2011.