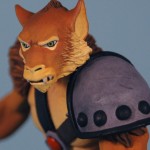 A few weeks ago, Icon Heroes requested the help of Thundercats fans to determine the size for continuing the staction figure releases. The choice was between 4 inch and 6 inch sizes. The 6 inch size class won with an overwhelming 78% of the vote. Now we just have to wait to see what Icon Heroes has in store for this growing line. 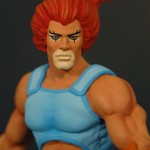 Icon Heroes is looking to the Thundercats fans for a bit of help. They plan on introducing a series of Thundercats Staction Figures (mini pvc statues) with some interchangeable parts. they’re looking to you, the fans, to help pick whether these should be 4″ or 6″ figures. Check out the Icon Heroes Website to vote. 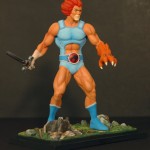 The first of, hopefully, many Thundercats mini statues has been released. Lion-O has arrived at the Icon Heroes warehouse and should be shipping from retailers very shortly. The six inch tall statue is available for $59.99. 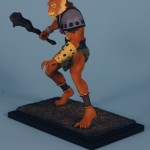 Icon Heroes has posted the first official photos of their next Thundercats staction figure; Jackalman. Like the Lion-O before it, Jackalman will stand about 6″ tall. No release date or price has been announced.

See a host of images by clicking the headline of the story. 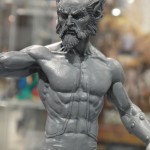 Included are pics of Lion O and the Thunderclaw, Jaga and Jackalman. 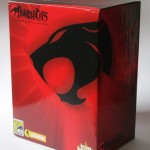 Icon Heroes has posted two new updates. The first update shows the prototype Thunderclaw standing next to a prototype of the Lion-O statue to give a sense of scale. This is not the Lion-O that will be included. They have also added the first in-package photo of the San Diego Comic-Con 2010 Lion-O Statue.

See both images by clicking the headline of the story. 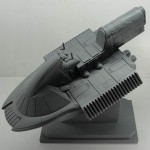 Today we have a few updates from Icon Heroes on their upcoming Thundercats products. They have put up a first look at the Thunderclaw Prototype. The Thunderclaw will include a Lion-O statue.

Also, San Diego Comic-Con 2010 attendees who buy the AFX SDCC exclusive Lion-O statue will get a Free Lion-O Magnet. They have also shown a pic of the bottom of the Lion-O Statue Base.

See the pics by clicking the headline of the story. 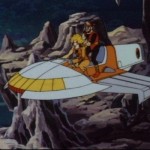 Icon Heroes has announced a Thunderclaw statue for their Thundercats Staction Figure line. The Thunderclaw was a hovercraft vehicle, and one of the last vehicle toys produced for the original line. 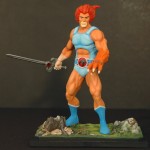 Icon Heroes has unveiled the standard edition Thundercats Lion-O Staction Figure. The standard version comes with the extended Sword of Omens as well as a different base.

Check out the photos by clicking the headline of the story. 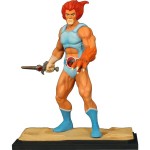 Icon Heroes has revealed a full photo of their upcoming Thundercats Lion-O Staction Figure. This will be a San Diego Com-Con 2010 Exclusive, with a standard version to be available sometime later.

Lion-O is presented in battle stance with his Sword of Omens and Claw Glove! This resin mini statue stands approximately 6 inches tall and is incredibly detailed atop an environment base – a perfect display companion piece with other 6 inch action figures and statues! Limited to just 500 pieces, it will only be sold at San Diego Comic-Con at the Action Figure Xpress booth #4045. If you can’t make San Diego Comic-Con, don’t worry – we will also have a regular edition Lion-O available soon after!

For a full gallery, click the headline of the story.