Hey there fans and readers, we’re back again with another awesome prize to give away! Once again, forum member LiarDice Films has provided us with an awesome piece of Thundercats memorabilia to offer up to the great fans of Thundercats.

We have an original, modern Thundercats: Season 1 Episode 1 – The Sword of Omens Part 1 Script, signed by King Claudus (and original Lion-O voice actor) himself, Larry Kenney. Not only that, but this script is slightly different than the episode that aired!

How do you win this awesome prize? Simple, all you need to do is take a photo of your best Thundercats “fight scene” using your own Thundercats figures (modern, vintage or mixed between the two).

For rules stop by the Thundercats Script Contest Thread to read more and post your entry. For a look at the prize, click the headline of the story. 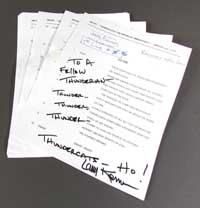